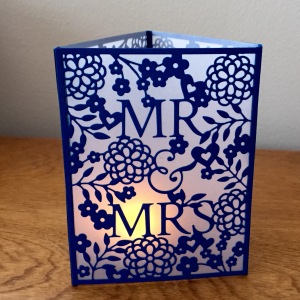 Because I love my Mother-in-law very much (she is a really great lady), I offered to make 50 paper lanterns for her wedding this past May.  I knew she was going for a “festive and handmade” look, and I had spied this gorgeous and delicate die from Taylored Expressions a few months back.

Since the design had a frame surrounding it, I thought it would be perfect for creating something three-dimensional.

You might be wondering how I went from die to lantern…Well, I had previously made some striking Halloween lanterns (here is my version), from directions found here. I figured I could apply the same idea to make table decorations in royal blue and white, my Mother-in-law’s wedding colors. 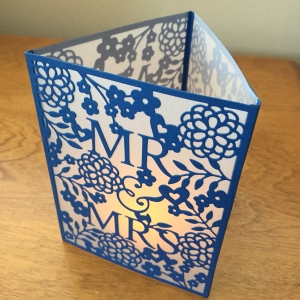 So once the bride-to-be had told me the number of tables at the reception (25), and the number of lanterns she wanted per table (two), I realized that 50 lanterns would mean making 150 panels! Of a very intricate die-cut, on card stock substantial enough to hold its structure.  Oh boy!

If you ever have tried to cut an ornate design with a wafer-thin die, and it’s giving you problems (or maybe you have to do a whole bunch of cuts from a particular intricate die), may I suggest trying the “dryer sheet method?” You can watch how it’s done here, but basically, you put a dryer sheet at the bottom of your cutting sandwich, and after you cut, most of the extra bits peel right off with very little picking required! And I’ve never had the die not cut through all the way either.  A revelation!

After I had cut all of my panels, I needed to adhere them to some vellum.  This would give the lantern a nice soft glow when a battery-operated tea light was placed inside.  I decided to use spray adhesive, in order to get a thin coating on all of those tiny details.  Because I had to work quickly (spray adhesive starts to dry fast), I just quartered 8 1/2 x 11″ sheets of vellum, and then trimmed the panels after they were dry, rather than trying to center each sticky panel onto a smaller piece of vellum just so.

After trimming, I adhered 1/8” Scor-Tape to the inside of the longest sides.  I’d peel off the backing layer when it was time to assemble the lanterns.

Next, I made the hinges.  Three hinges per lantern meant that there were 150 of these to be made.  Hinges are very simple though, and I just cut 5 1/2” card stock (the same royal blue) into 1/4” strips and then scored lengthwise down the middle.

I had to travel to this wedding (from Southern California to Pennsylvania), so at this point, I just packed up my hinges and flat panels.  When I got to the reception site the day before the wedding, I quickly assembled the lanterns.  Because I made the hinges longer than the panels, I had to do a little trimming, but this ensured everything looked as neat and flush as possible.  I also packed some extra 1/8” Scor-tape to fix any peeling corners. 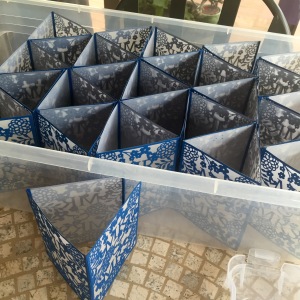 Here’s a finished lantern (below), at the reception.  A guest ended taking home most of the lanterns to use for a relative’s wedding! That made my heart glad 🙂 In the end, I went through almost two boxes of dryer sheets, eight packs of Paper Source royal blue card stock, 40 sheets of vellum, and an entire roll of Scor-tape. My cutting plates might never recover!